Welcome to the Anni-VERVE-sary Blog Hop! Verve turns three today and we’re celebrating with a hop, hop, hop! If you've already been hopping along, you arrived here from Angela's (yes there are two Angela's in a row on the blog hop) blog. If not, head on over to Julee's Blog (owner of Verve), for all the info on how to win prizes (after all, what's a party without presents?), and to start hopping from the beginning. If there's a hiccup along the hop, you can always head to the Master Hop List to get the full list of links. 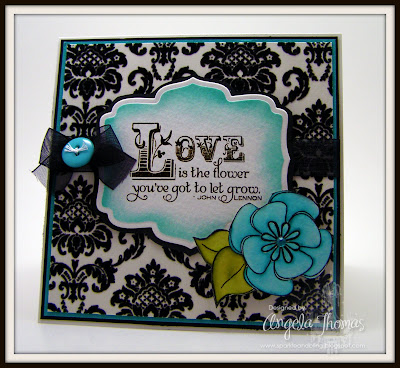 I had so much fun making this card!! I used the set called "Love's Flower" which I have been in love with forever.  Right after I signed up for the blog hop, I started going through all my Verve sets and realized I wanted something new so I popped on over to the Verve store and into my cart this set went. I'm so glad it arrived this week otherwise I would have been using one of my older sets.  For the sentiment, I've used Versamark and Basic Black ink and then embossed with Clear embossing powder.  With my Spellbinder's die still in place I sponged with Bermuda Bay ink for a bit of color.  I love how you can get that white border around the die.  For the black matting, I used the same die but went around the outside edge with my craft knife because I didn't want a big border.  The flower has been watercolored with both Tombows and SU Markers.  To be honest,  in real life it looks a lot softer than the pic.  I added a small rhinestone in a matching tone to the center of the flower.

Thanks for hopping by! Now it's time to hop on over to Kathleen's blog, for a little more Verve-y goodness.

You'll want to make sure you leave comments along the way because there will be prizes for lucky commenters somewhere along the hop!!!

Posted by Angela Thomas at 7:00 AM

I love the toile background on this card, stunning with the focal and colors chosen.
Best wishes.
Chanticlear1@gmail.com

Pretty card and lovely sentiment too.

Very pretty! Love how the bright colours pop off the black and white! I wish I could sponge like that!

Stunning! The sentiment and flowers are perfect against the lovely damask background!

Ooh, I really love this card! I love the touches of blue and green!

The colors are so striking and the detailing is perfection! Beautifully done, Angela!

Wow. The color scheme on this card is just stunning. I always love teal & black, but the little green pop of color in the leaves enhances the whole thing. Fab job!

love how the black makes the colors really pop!

This is wonderful :D

This is just beautiful. Your sponging is magnificent and I love the stunning colors.

Oh, this card is stunning - love the contrast!

What a beautiful card - that flower really pops, too.

Wonderful card. The colors work so well together. Great sentiment and love the way you sponged the die-cut. TFS.

Ooooohhh girl, this is fabulous!! Love that paper!

Beautiful bold colours on your card. Love that flower too :D Great job.

Ooooo..I love the rich feel of this card!!! The colors are GORGEOUS!!! LOVE the layout, too!!

Love this gorgeous blue blossom on the sensational damask background!!

This is stunning! I love the color combo, that gorgeous dp, and of course that fab flower! Awesome card:)

Wow, this is so stunning! Love the pop of turquoise with the black and white!

So striking and rich with all that black. Such a great choice of colors because the flower really pops. Great card :>)

This is so lovely! I really love the pop to this card, fabulous work!

wowsers....this is just beautiful!! So elegant and eye catching!!

I adore the pops of color on this black and white card.

This *IS* stunning! Love the colour combo on this.

Such a beautiful card, I love how the turquoise just pops off of the black/white background. Bravo!

I love this card. I read your own comment, and I think you are coming in to your own too, in card making. I love this post.

The blue just pops off the black and white. Love it!

This is just beautiful!

This is super pretty. Love it! TFS!
Hugs
Nikki
Simple.scrappin@yahoo.com

I love the black and white with just a touch of blue and green. The sponging around the sentiment is so pretty, and the damask background is perfect with the gorgeous font of the sentiment!

I love the dp - so elegant! Beautiful work!

This card is just so rich and luxurious. I just want to keep staring at it! Beautifully done! Thanks so much for celebrating with us!

Love the work you did with the sentiment in the nestie.

Absolutely beautiful color combination. I too love that flower

Not to be repetitive, but this card IS stunning! I totally love it! Repetitive

Beautiful. There isn't one thing that I don't LOVE about your card!!! Amazing!!!

Love your color combination! That blue just pops off the black!

LOVE, LOVE, LOVE this card!! The colors just pop out of the background. Just gorgeous!!! Love the flower too. So pretty!

eeek!!!! LOVE this!!!! Very elegant and the pop of blue is great. I have yet to perfect my inking and you are inspiring me to get back at it and get it done....love it!! Oh, and I'm a fellow B.C.er!!! We drove through Nanaimo last week on our vacation...we sure do have a pretty province :)

This is so stunning! I always forget that I can sponge color around a sentiment and not just a neutral. Thanks for the beautiful reminder! I love how that turquoise just pops off of the card!

Beautiful card - love the black and white with the splash of color - always makes an impact!

love the richness of the color combo.very stunning.

Just so elegant & gorgeous, I hope you entered it in the Moxie Fab challenge ;)

So beautiful! Love the teal shading!

I love your pop of color card. It's so pretty.

This is stunning! Love the pop of color with the black/cream!

OMG this is just gorgeous!! LOVE LOVE LOVE the black and white with the teal popping through.

Gorgeous! Love the black with the pop of color.

ohh I love the blue against the black and white! very nice!

Your card is amazing!

That color really pops against the black. Beautiful card.

Love the contrast of the aqua with the black and white. Just beautiful!

Such an elegant card, love it.

Glad I kept on hopping - love the way your card pops!

Thank you so much for sharing!!!

Black really makes a card look elegant! It is a very striking card!

fabulous card....that looks like a ton of time and work with the embossing and cutting, etc. sooo welll worth alll the trouble!!

What a striking card! You did your new Verve stamps proud! Thanks for the inspiration.

LOVE, LOVE, LOVE this! So gorgeous!

Angela Thomas
Nanaimo, BC, Canada
I have been stamping for approximately 5 years and it's my therapy or should I say my addiction!! I love being able to inspire others with my creations. Thanks for popping by! If you have any questions, feel free to email me at scottha@hotmail.com

All artwork is Copyright © Angela Thomas. All artwork displayed on my blog is shared for creative purposes & for personal inspiration only. Please do not reproduce my work for your gain without properly giving me credit. 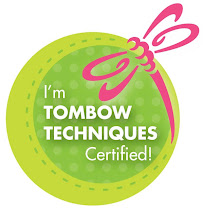 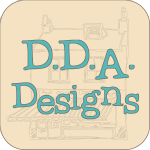